THE SANDWICH: The surprise sammies are finally back with The Grifters Grinder! 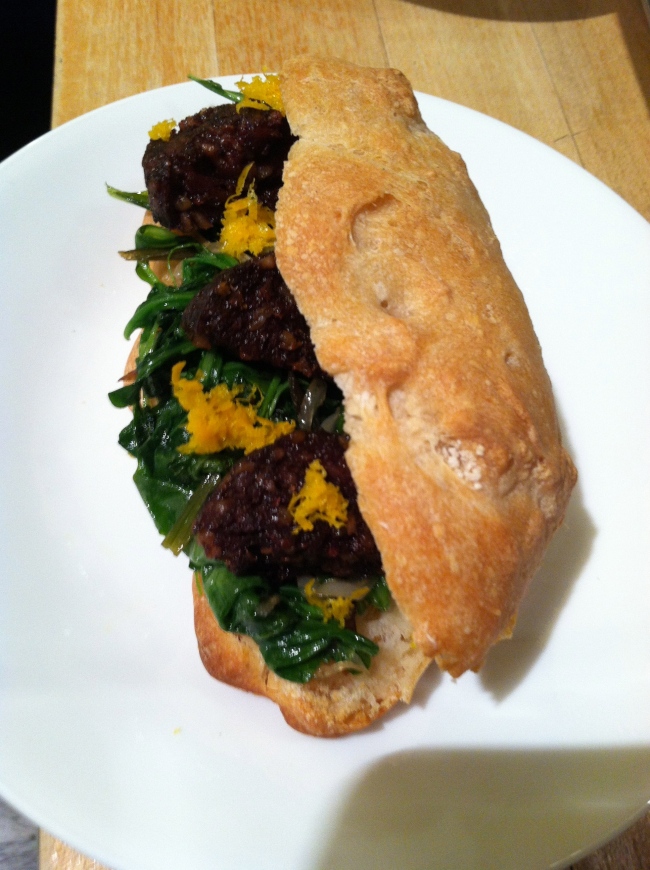 THE INSPIRATION: The 1990 neo-noir classic, The Grifters, starring the delicious John Cusack, Anjelica Huston and Annette Bening. It’s one of my all-time favorite movies, and all three actors are spectacular.

WHY? Because Noir is the Let’s Lunch* theme for June, in honor of Singapore Noir, a new book of dark tales by that city’s best authors, including Let’s Lunch host Monica Bhide and edited by fellow Let’s Luncher Cheryl Tan!

Greens, i.e. sauteed arugula and ramps — For the money everyone in the movie was trying to skim off everyone else.

Orange zest — Anjelica’s sociopathic mob boss (as opposed to the empathic ones) terrorizes her with a towel and a bag of oranges. Who knew a bag of sunny fruit and an old insurance scam could elicit such terror? 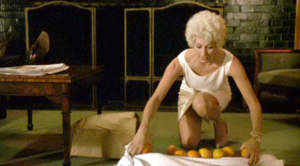 Shrimp paste — Delicious John waves off some cops curious as to why he’s keeled over the hood of his car by explaining that he must have eaten some “bad shrimp.” (Obviously, the shrimp paste I used didn’t go bad; I just don’t know too many people who would consider shrimp paste “good shrimp” … )

THE RUSE: “Hey Alvarez, I have something vaguely World Cup-related to drop off for you.” See, black pudding is from the U.K., and for some reason, I always think of England first when I think of the World Cup.

Alvarez: My sister’s boyfriend and a diehard Tottenham Hotspurs fan who’s on a mission to watch World Cup 2014 games all over the five boroughs.

Ryan: A colleague of Alvarez’s who I think was new to black pudding. 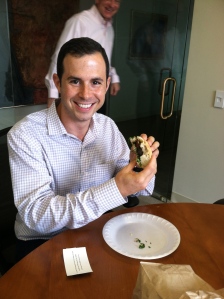 Mondell: “Oh, we have blood sausage in the Caribbean, but we use rice instead of the oatmeal,” said Mondell, another friendly face at Alvarez’s office.

Robert: Another Alvarez coworker who used to live in the U.K. and was happy to see a blood sausage sammy magically appear in his office.

THE VERDICT: “This was the culinary equivalent of Extreme Makeover: Home Edition,” said Alvarez. Robert and Ryan just seemed happy that these sammies supplanted the bad juju from the mysterious turkey meatloaf/Salisbury steak offering in their cafeteria.

Slice the black pudding into 1/2-inch disks and pan fry in olive oil on medium-high heat, making sure all sides cook, about 3-4 mins a side.

Remove the meat, and sauté the sliced ramps — I used three ramps, including leaves and bulbs for five sandwiches — in the remaining pan oil on medium heat for 3-4 minutes until they’re translucent and limp, but not brown. Toss in several handfuls of fresh arugula and stir until all the leaves are wilted.

Turn off heat and stir in the teeniest amount of shrimp paste. I dipped the very tip of a butter knife into the jar for a paste equivalent of a pinch. Stir that in with the arugula and ramps until evenly distributed.

Slice baguettes lengthwise, but not all the way through, creating a V.

Layer the arugula-ramp mixture onto the bottom half of the bread. Then place the black pudding disks along the greens. Sprinkle just a couple pinches of orange zest atop the meat.

*Let’s Lunch is a growing global group of friendly, fun food bloggers that meets monthly for a virtual lunch date via Twitter (#letslunch) and shares posts on a new topic each time. Here are the other Let’s Lunchers’ posts!

Margaret’s Black Fried Rice at Tea and Scones, Too

Please check back here for more noir-themed links to Let’s Lunch’s other bloggers, as I’ll update them throughout the day!